Black Men We Still Have Slave Chains To Break

Black men some of the chains that bind us are ego-tripping, titles, white validation and dependency; chains of super-machoism, womanizing, hating, and money-chasing; chains of alcoholism, drug addiction, criminal mentality, narrow-minded religiosity, and debt; chains of lust for clothes, shoes, jewelry, cars, violence, and recognition. 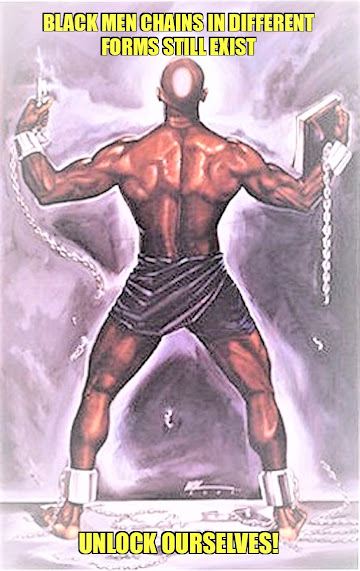 Posted by Kenny Anderson at 2:25 PM No comments:

Some Thoughts on Kyrie Irving

“Black men have used superior physical ability as well as 'soul and style' not only to thrill and entertain their fellow Americans but also to make money for white owners, yet they have been unable to control their own destinies." – William Rhoden, from his book “Forty Million Dollar Slave”
I got a little something to say about the Brooklyn Nets star Kyrie Irving’s controversy. Let me preface this post by stating I’m not a conspiracy theorist and I don’t support false political, religious, or historical narratives.
In this post I’m not addressing the controversial anti-Semitic movie Kyrie tweeted “Hebrews to Negroes: Wake Up Black America”, I’m addressing the repercussion of his tweet that from my perspective was over the top: racist, excessive, and emasculating.
Indeed, there are disparate levels of outrage and penalties over anti-Semitism as opposed to anti-Blackness. Kyree Irving stated he was not anti-Semitic and publicly apologized for his tweet, but that was not good enough he was suspended for 5 games without pay by the Brooklyn Nets and has the following humiliating stipulations placed on him:
*Apologize and condemn movie
*$500K donation to anti-hate causes
*Sensitivity training
*Anti-Semitic training
*Meet with ADL, Jewish leaders
Moreover, Kyrie Irving was hit in the pockets by Nike (Inc.) suspending its relationship with Irving and canceling its next Irving-branded shoe release in the aftermath of his tweeting of an anti-Semitic documentary; white corporate men can giveth and taketh away!
Over recent years white celebrities like Madonna, Paris Hilton, Charlie Sheen, Tim Allen, and many-many others have made racist comments, other than apologizing they didn’t have to attend sensitivity training, Anti-Black training, meet with the NAACP/ Black leaders.
In many instances white Jews have the same attitude as white Christians ‘white fragility’ the disbelieving defensiveness that white people exhibit when their ideas about race and racism are challenged and particularly when they feel implicated in white supremacy.
For fragile white Jews any truthful criticism of their racism by Blacks is labeled as anti-Semitic, both Black truthfulness and falsehood regarding Jews is lumped in the same category as anti-Semitic.
Even though NBA star Kyrie Irving’s tweeting a movie controversy was nowhere near on the level as NFL quarterback Colin Kaepernick’s controversial righteous stand of kneeling during game-day National Anthem, they both were castigated! Some lackey Black ex-NBA players were brought out to condemn Irving as was some lackey Black ex-NFL players were brought out to condemn Kaepernick.
Yes, Kyrie Irving and the rest of the Black NBA players can officially ‘superficially’ wear Black Lives Matter and Vote t-shirts but they can’t take real unofficial stances. Black male millionaire professional athletes have less freedom of speech than poverty stricken Black men kicking it on the corner.
What’s clear throughout this country’s history when Black men become controversial on any level they pay a helluva price like no other races of men in America! 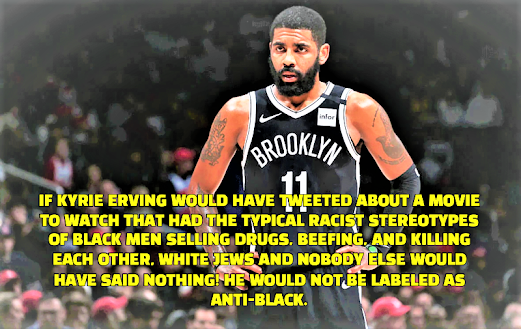 Posted by Kenny Anderson at 9:03 PM No comments: 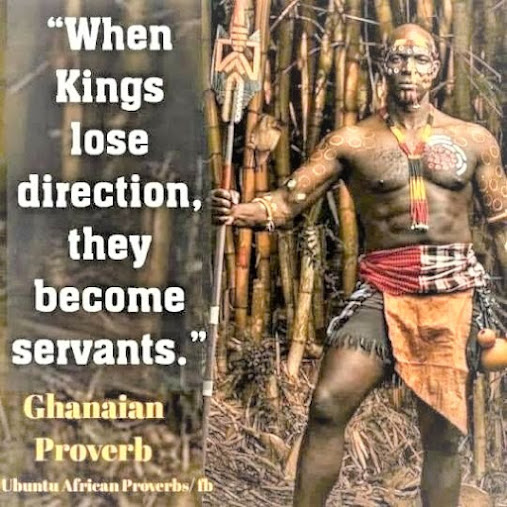 Posted by Kenny Anderson at 8:57 PM No comments:

Reflections on the Million Man March

“From the Nation of Islam who initiated the Million Man March (MMM), to other Black male leaders and Black men in general, there was no deep-seated commitment to concretizing the principles of the MMM. Thus over the past 27 years the momentum declined year after year that today’s younger generation of Black men don’t even know the March ever took place!” - CNK

*I authored the following article Oct 16, 1996
A One Year Review: Has The Million Man March Lost Its Meaning?
It has been a year now since the historic Million Man March taking place on October 16, 1995. About two million Black men converged on Washington, D. C. to participate in the Day of Atonement.
That day in D.C. established a date in our history that we would annually observe as a time of reflection, to focus on the themes of reconciliation and responsibility.
I believe the meaning of the historic day that the Million Man March took place, and the perilous juncture that Black men face in particular and we as a people in general was not fully grasped by Black communities across this country.
The meaning of the March became secondary to so many euphoric Black men who were satisfied with just being at the March. During the convergence process of the Million Man March, there was a unity of purpose of Black men that resulted in the March being a success.
However, once Black men returned to their oppressed communities, they were confronted with the stark reality that it is much more difficult to organize our people to solve the problems of apathy and socioeconomic degradation, than it is to mobilize a convergence of two million Black men.
The post-Million Man March period should be an ongoing reflection and questioning of its meaning to Black men.
*Were the pledges we made empty promises?
*Are we more concerned about our oppression?
*In this span, have we been constantly atoning by being self-critical and self-correcting?
*Have we settled disputes, overcome conflicts, and put aside petty grudges that thwart our efforts to maintain operational unity?
*Did we become dependable and accountable to our obligations and duties in the community?
Without the full meaning of the March and the conditions confronting us, most Black men would have to say ‘no’ to the above questions of principles.
If we understood the meaning of the March, we would remember and be inspired daily by those brave Black men Ancestors who genuinely marched for freedom before us. Embracing the meaning of the March would keep us awakened, because many of us are still sleeping through a racist backlash.
Most importantly, fully knowing the meaning of the Million Man March would cause us to be committed. Unless Black men are dedicated to ongoing struggle, we will always lack follow through and be unable to overcome challenges.
As Black men, we face tremendous daily challenges; we face the difficulty of trying to save young adult Black males like Tupac, who are being murdered by each other every day; while many others are victims of racist police brutality and murder.
When we go out into our communities and face the hard task of confronting self-destructive young Black males who sell drugs and gang-bang; our task is compounded by the CIA and others funneling them drugs and guns.
These tremendous challenges will overwhelm all Black men who are not fully committed. Allowing ourselves to be overwhelmed only perpetuates a self-fulfilling prophecy of pessimism that Black men cannot follow-through when it counts.
As Black men reflecting on the first anniversary of the Million Man March, I’m reminded of a meaningful statement made by Brother Omowale Ankobia that puts our mission of responsibility into perspective, he stated:
“We must be our salvation, nobody but us can change the destructive conditions under which we live. Furthermore that’s the way it should be. We shouldn’t want it any other way. If we are too sorry to save ourselves, we are not worthy of saving.”
Black men who understand the real meaning of the Million Man March must make a daily affirmation pledge from the a verse of the Black National Anthem: “Facing the rising sun of our new day begun, let us march on till victory is won.” 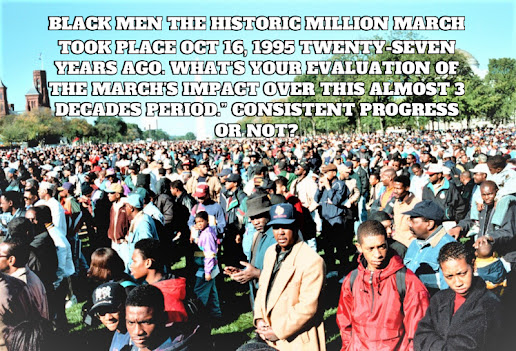 Posted by Kenny Anderson at 8:43 PM No comments:

Indeed, Black men we don’t have to think to breath because our autonomic nervous system is a network of nerves throughout your body that control unconscious processes. These are things that happen without us thinking about them, such as breathing and your heart beating.
Not having to think to breath results in so many Black men taking breathing for granted as ‘unconscious breathers’, not appreciating breathing and jeopardizing it with health neglect, risky actions, and self-destructive behaviors.
Black men let us become ‘conscious breathers’ being aware that our lives starts and stops with a breath. That we can survive without food for weeks, without water for days, but without air we cannot survive more than a few minutes. 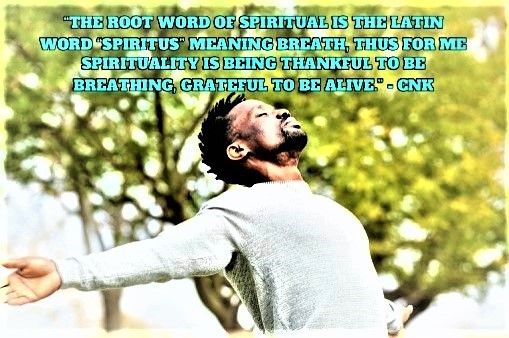 Posted by Kenny Anderson at 8:48 PM No comments:

Black women and women in general have double standards in the sense they have higher standards for men than they do for themselves. Furthermore when men and women both do the same wrongful acts the man's is always worse. 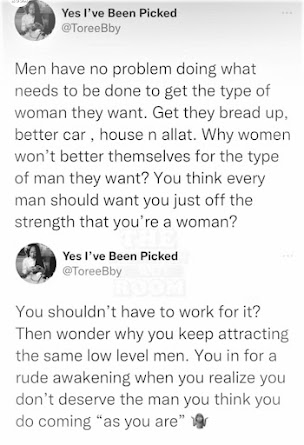 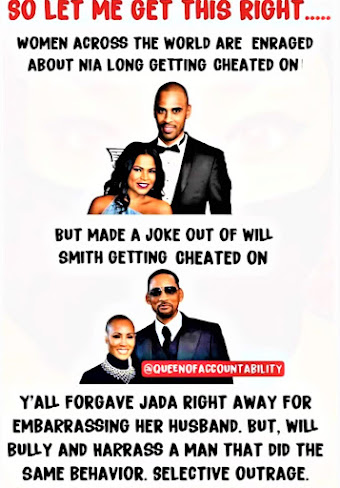 Posted by Kenny Anderson at 3:56 AM No comments:

Black Men Are Not Allowed 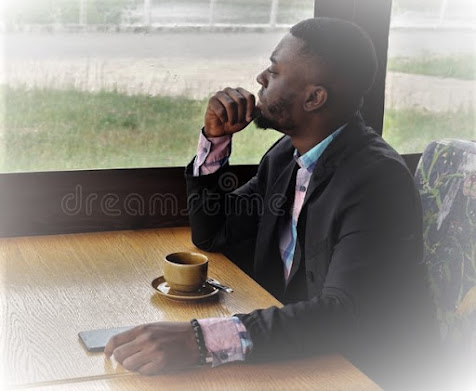 Posted by Kenny Anderson at 1:29 PM No comments: