Hey Sisters Good Black Men Want You, But Do You Really Want Them?


Johnathan Farley, Ph. D, a math professor and graduate of Harvard and Oxford University, stating that for years now we have seen the allure of the Black male “thug culture.”
In an article in Essence, titled “Players and Professors: A Nice Guy Steps Up,” he explained why even educated, professional Black women prefer to date thugs over professional Black men.

One women interviewed said Black women want a stronger protector and don’t see professional Black men as “strong.” Now, Sisters, I don’t mean to be rude, but if there’s any truth to Farley’s theory, then something is truly wrong with ya’ll.

Contrary to popular belief about Black men, I adore Black women. I have openly criticized the tasteless behavior I’ve seen from certain Black women and will continue to do so. But that doesn’t mean I hate my sisters; it’s quite the contrary actually: I love, cherish, respect, and admire Black women. In fact, I only date Black women!


But I must be honest sisters, too many of you all make it extremely hard for Black men to love you. And don’t think I’m not aware of why many of you are choosing to date White guys: it’s the perception that they tend to be passive and easygoing; they’re much easier to control and push around. But that’s a dictatorship, not a partnership. I believe this passiveness and easygoingness is a misperception that does not take into account that white men still dominate us and control America politically and economically!
Granted, I understand there are many Black men who don’t deserve the privilege of being with a Black queen. I’ve come in contact with plenty of deadbeat dads, womanizers, abusers, criminals, and wannabe thugs. But they make up a small portion of available Black men.
Nevertheless, many Black women prefer “bad boy” types. It’s masochistic really. They run into the arms of thugs and layabouts, procreate with them, and wonder why they’re left having to raise children alone.
Sisters, I have to be brutally honest, the Black family structure is crumbling because many of you are choosing to be with “niggas” instead of responsible, goal-oriented, good Black men. You waste your time kicking and screaming, hoping that “Tyrone” will get his act together, when instead, you can choose a nice guy.
I often hear sisters say, “I need a man who can handle a strong woman like me.” But wait a minute, why do you want a man to “handle” you? Are you an animal? Wouldn’t you rather be loved instead? Sisters, why do so many of you equate masculinity with thuggery?
Sagging pants, tattoos and rowdy behavior aren’t indicators of strength; they’re signs of immaturity and weakness. Get a clue: your children deserve better fathers; you deserve better husbands; the Black community needs stronger families. Stop choosing the wrong men.
Here’s the problem: Black women have become so cynical and afraid of being mistreated, they don’t know how to behave when they finally meet a good Black man. I get it: it’s hard to trust anyone after you’ve been hurt over and over again.
On top of that, many sisters are programmed to hate Black men because their mothers were mistreated by multiple partners, and told their daughters not to respect or trust Black men. It’s a vicious cycle, but it has to stop. If it doesn’t the Black family won’t survive.

To protect themselves from heartbreak, many Black women hide behind an emotional wall; they’re protected by a thick, hard shell. In essence, there are many Black women who behave and think like men.
Consequently, Black men are often afraid to share their emotions in fear that they will be ridiculed by hardened Black women. Black men who express themselves are called “punks” and “soft” by Black women.
But how can any relationship prosper if both people are either too afraid, or too stubborn, to express their feelings? This is often the consequence of dating a Black woman.
Sisters, instead of being in a meaningful, emotionally edifying relationship with a good man, many of you consciously select the alternative. But if you leave good Black men in the cold, where do you think they will go? That’s right, straight into the arms of a white woman.
Some Black women protect their own feelings by wreaking havoc on those of others. I call it, “hurt before you get hurt” syndrome. Sisters, this behavior is counterproductive: it will turn a good man sour and he won’t be emotionally available for the next woman, perpetuating an ongoing cycle.
A friend recently told me, “When a guy is too nice, I think he’s up to something or trying to play me.” She added, “With thugs, you know what you’re getting, I don’t have to wonder.”
I’ve also spoken to a number of single Black men, and they have all expressed a desire for a Black partner. Yes, you read that correctly sisters: Black men want you, we really - really want you. When we date other women, it has nothing to do with them being more submissive or obedient.
In fact, White, Hispanic, and Asian women, are no less assertive than Black women. That’s a misconception. Confident Black men aren’t attracted to docile, subservient women. Speaking personally, I prefer women who can think for themselves and do for themselves.
However, Black women have more of a tendency to belittle, demean, and ultimately emasculate Black men more than other racial groups women do their men.

For this reason, many Black men aren’t convinced that being with a Black woman is such a good thing; not because they prefer white or Hispanic women, but because they are often harshly mistreated, disrespected and unappreciated by the Black women they encounter. 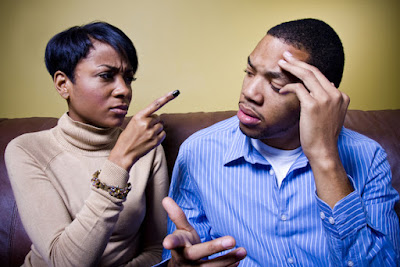 “It’s like they’re forcing us to go after other races,” one of my friends told me: “I go out on dates with Black women, and they tell me I’m not tough enough, I’m not wealthy enough, I’m not attractive enough. It’s funny, they expect so much from us, but most of them don’t bring much to the table either.”

Yes, too many Black women want us to be driving the newest car. They want us to be making six figures or more. They want to have a big house. They’re expectations are unrealistic, especially in a society where Black men still are at the bottom and have to fight for every dollar we get.
It’s still not easy to be a Black man in America, but I don’t think most Black women are concerned about this!”
Posted by Kenny Anderson at 11:19 AM