White linguistic scholars don’t agree on the origin of the word ‘Mother Fucker’, but they do agree that the first documented use of the word was by Black folks.

According to Black folks’ etymology the word mother fucker was based on the experience of Black male slaves who used the Ebonic term to refer to white slave-masters who raped our foremothers in order to break the Black family down physically and psychologically; and the word ‘MF’ also served as a means to avoid calling your slave-master your father.

Since Black folks used the word first I’m going to roll with our meaning of the word mother fucker. Growing-up as a child I constantly heard Black older folks and elders say with disdain when talking about racism was “them dirty-rotten white motherfuckers,” and I heard many young adult Black males often say disdainfully "mother fuck them racist crackers."

I also would often hear Black men with pride say in an ignoring sense "mother fuck them white people they aint important" meaning don’t pay attention 'get caught-up' in white peoples looks, beliefs, values, standards, and what they think about you because they’re ‘messed-up’; that they ain’t special 'superior'; you don’t need their approval so stop approval-seeking and be proud of your own Blackness!


The word mother fucker can be used to describe Black folks too, for example in the case of Black men who just want to fuck ‘have sex’ with Black women get them pregnant and don’t want to be fathers. MF used in another form to nullify ‘Fuck You’ can be said to many Black women who are damaged, never satisfied, selfish users, and play manipulative emotional mind games.

Fuck you can be said to many Black folks in general who are ignorant and stubbornly stuck on stupid; have bad attitudes, addictions, unrealistic expectations, ungrateful, etc. Fuck you can be used as mindful self-talk by saying ‘fuck my own bull-shit’ to self-check your own unproductive mental chatter and negative thinking.

Indeed fuck that, fuck them, fuck you, and fuck me can be used as a quick external and internal dismiss tool to keep it moving ‘don’t miss a beat’! 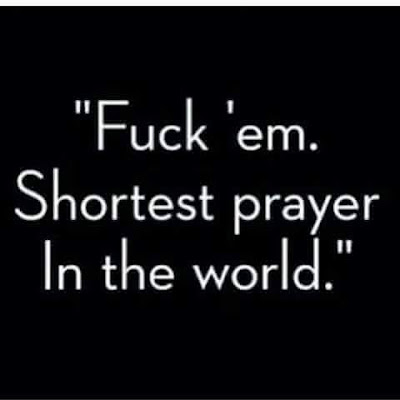 In recent years whites have taken the Ebonic term ‘Fuck’ and made a philosophy out of it and they have a manifesto book "The Subtle Art of Not Giving A Fuck” written by Mark Manson. This book is a decent read and highlights some good general insights; the following are some of Manson’s noteworthy points:

*Not giving a fuck is not about being indifferent. It just means you’re comfortable with being different. Don’t say fuck it to everything in life, just to the unimportant things.

*To not give a fuck about adversity, you must first care about something more important than adversity.

*Whether you realize it or not, you are always choosing what to give a fuck about. The key is to gradually prune the things you care about, so that you only give a fuck on the most important of occasions.

*If you are able to not give a fuck about the pain your goals require, then you become unstoppable.

*The moments when we don’t give a fuck and take action are often the moments that most define the course of our lives.

Indeed, Black folks we give a fuck about a lot of petty BS that has much to do about nothing, aint got nothing to do with dealing with racism, nor self-determination and gaining more freedom.

Moreover we have a lot of out-cold Black men who subscribe to a “I don’t give a fuck mentality” that’s self-defeating and self-destructive which drives Black-on-Black violence and murders.

It ain’t just about not giving a fuck, it’s what you're giving a fuck about?
Posted by Kenny Anderson at 2:27 PM