Let me begin by stating anytime an innocent Black man dies by murderous Black-on-Black male violence in America it’s tragic whether he works at a minimum wage job or is a rapper celebrity like Nipsey Hussle. 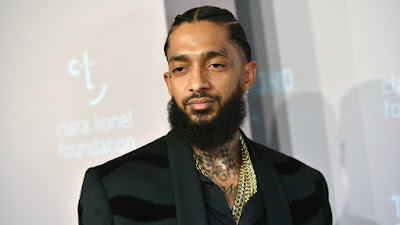 For me Nipsey’s murder was tragic in this regard, he was a redemptive ex-CRIP gangbanger with Black consciousness and rare in the sense that he had recently opened up a store to revitalize his South-Central Los Angeles neighborhood to offset white gentrification. More importantly Nipsey over the years was instrumental in trying to bring BLOOD and CRIP gangs together.

Many Black folks will say Nipsey’s murder is another graphic example of senseless violence. The truth is Black-on-Black male murders make plenty of sense, yes there are factors and reasons for it. One of the primary psychological factors that internally drives Black-on-Black male murders is self-hatred! Stanley “Tookie” Williams, co-founder of the Los Angeles street gang the CRIPS stated:

“I believe the core of why so many young Black men harm and kill each other is the embedded sense of self-hate. What I mean by that is, an individual who has been spoon fed so many derogatory images of his race will, after a period of time, start to believe those images. The images I’m talking about are the stereotypes that depict the majority of Blacks as being buffoons, functional illiterates, violent and promiscuous, welfare recipients, and indolent criminals. Unfortunately, too many Black people have been brainwashed into believing these racist stereotypes. And when an individual gets to believing, ‘Well, hell, if it’s true, then I must be just as disgusting as those images that are being depicted.’ So you end up lashing out at the individual, other gang members that you consider to be part of those stereotypes. In desperation, you’re trying to obliterate that negative image to rid yourself of this self-hate monster that subconsciously stalks you. In a sense, you’re trying to purify yourself, your environment, your race.”

Black male self-hatred is compounded by a sense of powerlessness, inside Black neighborhoods most of the businesses are controlled by the economic power of foreign merchant men (Arabs, Chinese, Koreans, East Indians, etc.) and the white man’s power dominates everything else. According to Sociologist Robert Staples:

“Since institutional power and other symbols of masculinity have been denied to the majority of Black men by White racist oppression and economic exclusion. Too many Black males, especially young Black males, have compensated masculinity based on fighting, violence, and exaggerated bravado.”

Unfortunately for too many Black men in America gangs and violence is fratricidal compensatory power. Also violence becomes misplaced aggression stress release from the tremendous distress of Black male powerlessness. Too many Black males use violence to discharge accumulated internal pressure to relieve tension of recurrent feelings of rage. In a self-destructive convoluted way engaging in violence makes them feel good providing ‘catharsis relief’ and gives them a sense of power and accomplishment: ’I’m successful I killed that nigga'!

A sense of powerlessness causes Black men to feel ‘invisible’ thus they use compensatory violence to be seen - gain ‘visibility’. For example when Black male murderers of Black men commit murders they become visible on the six o-clock news getting some news-shot fame, they finally get exposure. Eric Holder the suspected murderer of Nipsey Hussle was invisible now his visibility has gone viral. Murderous Black men like Holder finally get their recognition in a headline, momentarily they’re no longer as Ralph Ellison said the ‘invisible man’.

Furthermore powerlessness drives Black Males to be obsessed in obtaining compensated superficial symbolic power to be visible ‘all that’; constantly ‘playa-hating’ each other, rivaling and murdering each other over money, clothes, shoes, glasses, jewelry, and cars.

To just tell it like it is, Black on Black male violence has been non-stop in the post-Civil Rights and Black Power era. Indeed Black-on-Black male murders has been a normal every day way of life - a cemetery culture; as Nipsey Hussle stated: “We dealt with death, with murder; it was like living in a war zone, where people die on these blocks and everybody is a little bit immune to it."

Until we as a Black community sincerely address Black males self-hatred and powerlessness ‘internalized oppression’, something all Black folks are affected by, then Black-on-Black male murders will continue whether it’s a Black male murdered leaving his job at Burger King or a celebrity rapper like Nipsey Hussle gunned-down at his store. 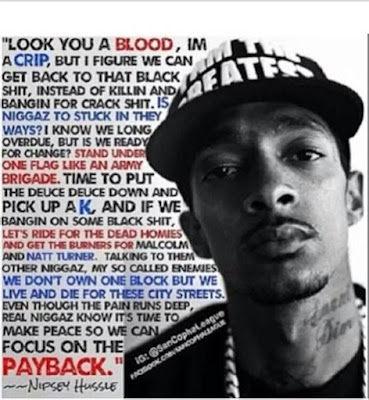