The Aggressive Emasculation of the Black Man: The Latest Assault on Our Race


There is no gain saying that there is a malicious campaign against the consciousness and self-awareness of the Black (African-Diaspora, African-American) man. There is an urgent need by some forces to rid him of his power and glory, and reduce him to a joke of his ancestry.

You see, the Black Man remains the strongest willed man on the face of the earth. He is strong in character, discipline, physic and moral. His abode has been termed the cradle of creation and the last stronghold for the survival of humanity.

This divine attributed of the Black Man has made him a target for hundreds of years by the other races of this world (both indigenous and alien). They say to themselves: “If we can defeat the Black man subconsciously and consciously, then we can defeat him physical and spiritually.” For no race ever survives a physical battle once defeated spiritually.

We have been attacked from all angles. We have been killed, maimed, deceived and sold. We have been shipped out to build other civilizations against our will. We have been brain washed to believe that our ancestors were murderous. And so, we abandoned their ways to hold unto the ways of the European, who has killed more humans than our ancestors ever did.

And when we thought the Black Man had seen the worst, these Vermin from the pits of hell found a way to convince our young men that masculinity can be thrown away for femininity; and that this femininity of a man with full male hormones and body parts is acceptable.

We always swallow everything hook, line and sinker, without considering the effect on our people now and the generations to come. Now we are at the cross roads of history. What would this generation be remembered for?

Over the years, through the media and calculated campaigns, the Black children, have been thought that it is okay for a man to appear weak and behave like a sissy.

These days, there is hardly a movie without a Black man dressed shabbily and gesticulating like a woman. It is a calculated move. Some say, there is an agenda to control world population. But we strongly think that is purely a psychological battle on the Black man. 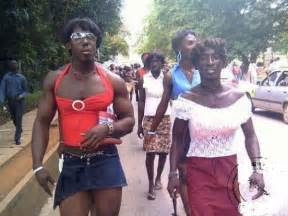 Now when the average 5-10 year old Black repeatedly sees these images on TV, without any rebuke from parents or elderly ones, his mind automatically says: “Oh this is cool. Everyone in the movie loves and appreciate him for behaving like a woman. And since he is a star, I would love to grow and become like him.” That is programming of the highest order and it works like magic.

Asides the movie industry, one other industry that has been used to target the minds of the Black man, is the fashion industry. A man is supposed to dress and look a certain way. But we have seen fashion trends that removes the masculinity in men’s clothing, and replaces them with feminine attributes. And then, a Black celebrity is paid heavily to wear these cloths and make them look cool.

This was some of the ideologies that strengthened the Europeans and Americans consciences during slavery, and much after. To quench the threat the Black man posed, he had to be enslaved in the body and the mind. This has always been a conscious effort, and it has taken a new more aggressive form in this era.

Although this emasculation has led many to homosexuality, this post is not focusing on homosexuality. Even those in clean suits and tie with firm muscles can be homosexuals. What we are shedding light on is the calculated attack on the self-awareness of the Black Man, to make him see himself as a man who has more feminine features and tendencies.

We, the Black race, owe it to ourselves, our children, and their unborn children, to resist this attack on our pride as a people. Over 30% of African-American men are in prison or have been spent some time in prison.

These are fathers and husbands who have been absent in the upbringing of their children. Now imagine if another 30% begins to behave like women, and are emasculated. What do you think would be the effect on African-American society?

Our task is a divine one, and it must be taken with all seriousness. We have a psychological war to fight. And the way it seems, we are losing already. Our first target, as a race, should be the younger generation.

Those between 1 day of age, to 18 years are the future, and if we don’t catch them young and coach them of their noble and masculine ancestry, soon we will have men who can’t lift a hand to defend our children and women.

One other challenge, we have, is that many of our women treat this with kid gloves. When the issues are raised on social media and in communities, you would find women who say “Let them live their lives. I find nothing wrong with these men dressing like women and acting like women. It is actually cute.”

Some other women have gone ahead to pamper and defend their boys who pick up these feminine traits. We believe their love for the boys blinds them to the real dangers of emasculation. If anyone should be crying out about this genocide on the consciousness of the Black man, it should be our mothers, wives, aunties, and sisters.

For if they don’t speak up, in the future there will be no real men to provide for and defend the family. And of course, there would be less men to get married to our women. And that would create an imbalance in our society.

Many African tribes and nations back home, are in the fight against this odd behavior. Many governments have placed stringent laws to checkmate, the excesses of such un-African tendencies. We can say that Africa remains the last hope for the Black man’s consciousness.

Although we can’t deny the fact that foreign governments and bodies, provide funds for the spread of these alien ideologies and behavior. They will try but they will fail. The pride, self-awareness and attributes of the negro man remains the foundation of his WILL POWER. And without will power, we are doomed.
Posted by Kenny Anderson at 7:07 AM