Natahaniel Abraham The Criminal Ordeal of a ManChild


A report was release by a panel of experts appointed by the Centers for Disease Control and Prevention Youths back in 2007 stating that youth tried as adults and housed in adult prisons commit more crimes, often more violent ones, than minors who remain in the juvenile justice system.

Sentencing youth as adults have not deterred other youths from committing crimes, nor have they rehabilitated the youths sentenced under them, this lack of rehabilitation is personified in Pontiac, Michigan’s own Nathaniel Abraham! Back in 1997 Nathaniel gained national and international media attention as the youngest person age 11 ever to be tried as an adult in the US.
In 1997, Abraham shot 18-year-old Ronnie Greene outside a party store in Pontiac and was convicted of second-degree murder as an adult, but sentenced as a child. Abraham was sentenced as a juvenile and was released on his 21st birthday in 2007 but later returned to prison on charges for attempting to distribute the drug ecstasy and released in 2017.

Recently Nathaniel was arraigned on multiple drug-related charges at two district courts. On May 28, 2019 Nathaniel pleaded guilty to these drug charges and will be going back to prison where he has spent most of his life; unfortunately it seems prison has become a default home for Nathaniel.
Indeed Nathaniel Abraham is the poster child of the failure of deterring youthful offenders for recommitting crimes by trying them as an adult. Personally, as a community leader I was involved in Nathaniel’s case from the beginning, writing and protesting against him being sentenced as an adult on the grounds of racism and the fact that he was only a child. I knew that trying Nathaniel as an adult would continue to have negative rippling effects on his life.

I knew what would probably – eventually happen to Nathaniel because as a social worker I spent a good chunk of my career providing volunteer services Male Responsibility & Fatherhood group sessions to incarcerated Black males; I heard stories repeatedly from session participants saying they had been locked-up constantly since a juvenile; they had become institutionalized!

Being institutionalized basically means that the norms of prison life has become internalized into one's habits of thinking, feeling, and acting; as psychologist Craig Haney stated:

“The process of institutionalization is facilitated in cases in which persons enter institutional settings at an early age, before they have formed the ability and expectation to control their own life choices. Because there is less tension between the demands of the institution and the autonomy of a mature adult, institutionalization proceeds more quickly and less problematically with at least some younger inmates. Thus, institutionalization or ‘prisonization’ renders some people so dependent on external constraints that they gradually lose the capacity to rely on internal organization and self-imposed personal limits to guide their actions and restrain their conduct.”

Understandably Nathaniel became institutionalized, as an 11 year-old child he had some emotional impairments and learning disabilities entering into and compounding the prison institutionalization process. Though Nathaniel is now 33 years-old he still has child within issues of prison arrested development and is still irresponsibly dependent on external constraints.

Black men suffering from prison institutionalization like Nathaniel along with paroling back into crime facilitating poverty stricken Black communities filled with drugs, hustling, and raw survival almost guarantees they’ll be back in prison.

From my perspective the Black community still has not grasped the psychological consequences of institutionalization on so many Black males like Nathaniel Abraham reintegration ‘revolving door’ back in and out of our communities.

Sadly and apathetically, this revolving door of Black men being in and out of prison like Nathaniel has for some time become normal; you know what most of us say this that “it is what is, aint nothing you can do about it anyway.”

An attitude of “it is what is” is fatalistic and defeatist and it’s unacceptable! Our community churches, organizations, and groups must do a much-much better job providing Black male prisoners returning to our communities with ongoing support and insight into the changes brought about by their adaptation to prison life.

They must be given some understanding of the ways in which prison institutionalization changed them negatively and the tools with which to respond positively to the challenge of reentry adjustment. 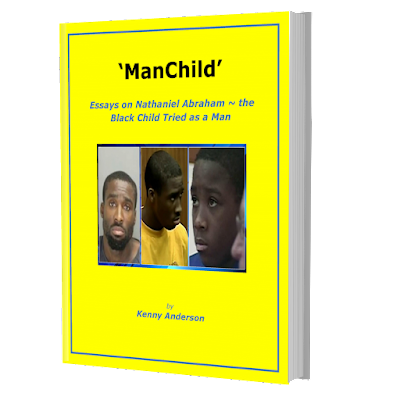 Click on link below to order
https://kennyanderson.selz.com/item/manchild-essays-on-nathaniel-abraham-black-chil-tried-as-a-man
Posted by Kenny Anderson at 8:11 AM