Dear Shawn Corey Carter,
First, I would like to tell you personally that I believe you are the greatest rapper who ever lived. I’m sure you’ve heard this before and I know that it is useless to debate such a subjective topic but it is important to know that, aside from being my favorite rapper, you are also my favorite musician, period.
More than John Coltrane, Jheri Curl-era Luther Vandross or that bitch-ass Beethoven who doesn’t have a single song with Mary J. Blige or DMX. Along with Miles Davis, you are the only musical artist whose entire musical catalog is on my phone. I rarely listen to anything other than hip-hop and, in my opinion, you are the G.O.A.T. and number two isn’t even close.
And that is all.
As someone on the edges of what many people collectively refer to as “the media,” I am often asked which living person I would most like to interview. And, as much as I love your music, my stock answer is always someone else. I have learned that most of the people whom the public has placed on a pedestal are often shorter, less attractive and a lot dumber in real life than they are on movie and television screens. So, to maintain the idealized version of Hov that exists inside my pessimistic brain, I have removed any desire to interact with the celebrities whose work I appreciate. I love the Jay-Z in my headphones and that is all I care to know.
I do not consider you a prophet or a visionary. I would not like to have brunch with you and Beyoncé to “pick your brain.” I don’t care to hear your opinion on global warming or the solvency of the international monetary fund. But, if I was being truthful, I must admit that it is impossible not to admire the way you climbed out of Brooklyn’s Marcy housing projects and—with your own words - constructed a machine that catapulted you to the position of the richest musician on earth.
I appreciate your quiet activism that includes setting up a trust for the children of police shooting victim Sean Bell; bailing out protesters in Ferguson, Mo. after the death of Mike Brown; using your platform to tell the stories of Kalief Browder and Trayvon Martin and perhaps most impressively managing to get “chose” by Beyoncé. Even with all of that, I didn’t put you on a pedestal or hold you to an impossible standard except the one that makes you rap your ass off.
So when I discovered that you and your Roc Nation company were partnering with the National Football League to consult on the Super Bowl Halftime show and collaborating with the league’s social justice campaign, I still don’t quite know why I was so disappointed to discover that you were the one thing I feared most: Human.
Let’s be real, Jigga.
The NFL has no interest in social justice. As long as they can keep their new-millennium Mandingos mute until the players’ repeatedly concussed brains and cartilage-less knees render them disposable, the NFL couldn’t care less about black lives. The only reason the cabal of billionaire owners are attempting to look like they give a fuck is because of one man: Colin Kaepernick. 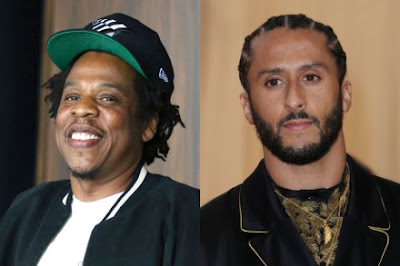 Before Kaepernick took a knee to bring attention to American injustice and inequality, the NFL’s biggest and most visible charitable contribution to society was the brave act of wearing pink shoelaces in October to bring awareness to breast cancer, which is a noble but commercialized cause. And as a reward for risking the thing that he worked his entire life for, the NFL owners blackballed Kaepernick, the league passed rules to silence anyone who followed in his belligerent footsteps and the president of the United States of America called his mother a bitch.
But that is how oppression works. The upholders of white supremacy rarely stain their hands with the blood of the righteous. There was no need for the NFL to bash Colin Kaepernick’s skull in when they could just strip him of his livelihood and make space for mediocre men who would happily “toe the line.” I don’t care to debate if Kap was still an elite-level quarterback but it is undeniable that there are dozens of lesser signal-callers drawing checks from the NFL who were rewarded for their willingly silent compliance.
That is the message of systematic oppression—that talent and honor are less important than obedience. The cabal of powerful men who enforce the tenets of white supremacy will stop at nothing to ensure that no one escapes their foolproof system. They will gnaw at the flesh of the noble until there is nothing left to behold and then clean the spaces between their teeth with the remnants of bones. And this is what they tried to do to Colin Kaepernick. But try as they might, they could not make him disappear.
He won.
Colin Kaepernick did not think that kneeling would stop disproportionate police killings or eliminate inequality. He wanted people to see it. To talk about it. To understand that America was, at once, the land of the free and the home of the enslaved. With all of the infinite power and might they possessed, they still could not silence Kaepernick’s message.
And if there was one person in the entire culture that echoed that same sentiment, it was you, Jay-Z. You were a living testimony to anyone who assumed that success equaled acquiescence and believed that they must comply if they want to conquer. You achieved billionaire status and used it to Free Meek, call for diversity, fight injustice and advocate for Colin Kaepernick. And you somehow managed to do it without wearing a MAGA hat, shucking, jiving or shying away from controversy.
You were the hustler’s dream. You literally leveraged your street knowledge into a seat at the table. But capitalism is a marauding wolf. It can make mincemeat of morals and transform the word of God into meaningless gibberish. And now, we have seen the righteous forsaken and have witnessed their children begging for bread.
To be fair, you, more than anyone who’s ever spoken into a microphone, explained to us that you are a capitalist above all else. So I cannot be surprised at your entertainment deal when you explicitly said, “I love the dough.” Again, I am not holding you to a superhuman standard of perfection.
I just never thought you were a thief.
Any social justice partnership with the NFL that doesn’t include Colin Kaepernick not only lets the owners off the hook and validates their shadow-ban, but it essentially profits from the movement that he started and hands the proceeds to the NFL.
And for what?
For a few dollars more? For a few minutes on center stage under the bright lights of the white gaze sponsored by Pepsi and Cool Ranch Doritos? So white America can clap off-beat to a medley of white-washed, bleeped-out hits they haven’t heard since they screamed “Jigga my nigga” during the Beta Chi party their sophomore year at the Wypipo State University?
And I know you said the only way to move forward is by “creating conversations.” You didn’t create a conversation, Colin Kaepernick did that. You hijacked it for a check.
And none of this negates the work you have already done, nor is it a condemnation. I’ll still mumble the lyrics to your verse in “The Watcher” when I’m making eggs tomorrow morning just like I did yesterday. In fact, I hope that, as you “move forward,” you are comforted by the jingling sound of the 30 pieces of silver inside the cupholder of your Maybach. I hope there is enough money to warm your cold heart and cool you down from the spotlight’s beckoning glare.
I sincerely hope your venture with the men who blackballed Colin Kaepernick is an unmitigated success, even though I probably won’t be able to stomach the sight of my favorite artist dancing a jig inside the belly of the beast without wondering who they will devour next.
I’d rather watch you sell crack. But, if there is one lesson I’ve learned from the ancient texts of one of my favorite philosophers (I forget which one), it is this: You can’t knock the hustle.
Posted by Kenny Anderson at 3:45 PM