Too Many Black Folks Are Too Concerned With Forgiving Instead of Demanding Full Racial Justice!

From my perspective too many Black Christians are caught-up in forgiveness; they got too much 'theology', what they need to understand is some 'psychology' to address their inappropriate behavior of internalized racism.

Their inappropriate behavior of forgiving a racist convicted criminal cop Amber Guyger as if she was a victim; that white people are still 'right' deserve empathy even when their dead 'wrong'. Because of forgiveness white skin superiority is never fully wrong on earth and so shall it be in heaven.

Do you think white people and white police in Dallas forgave the Black man Micah Johnson for killing those 5 white officers there in 2016 - NO! Being conscious of Black history I'm not shocked at the present behavior of too many Black folks forgiving Guyger the killer kop.

As much I honor and respect Dr. Martin Luther King's bold leadership I had an issue 'differed' with his forgiving attitude toward the racist police who murdered Jimmie Lee Jackson.


On February 26, 1965, Alabama civil rights activist Jimmie Lee Jackson died after he was brutally beaten and shot by Alabama State Trooper James Bonard Fowler during a peaceful voting rights march. Fowler was indicted and plead guilty to misdemeanor manslaughter. He was sentenced to six months in prison.

After Jackson's funeral at the cemetery King spoke about forgiveness and love; he pleaded with Black people to pray for the police; to forgive the murderer and to forgive those who were persecuting them. King ended by telling everyone to hold hands and sing “We Shall Overcome.”

Indeed King was struggling internally between the theology of forgiveness and racial justice. Many young Black civil right activists differed with King like Kwame Toure (Stokely Carmichael), Jamil Al-Amin (H. Rap Brown), and many other SNCC participants; they extolled self-defense and justice, not forgiving racist oppressors and murderers.

Black Christians will quote that vengeance is the Lord's, for me forgiving racist murdering police is for the Lord. Amber Guyger should have been sentenced to the 28 years that the prosecution wanted, but the Black jurors, the Black judge, and Botham Jean's own family did not want full justice. 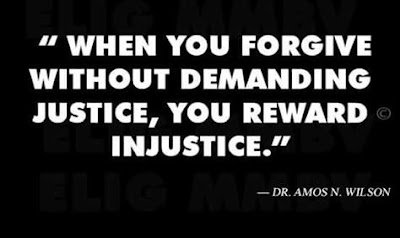 Michael Drejka a white Florida man who was found guilty of manslaughter in killing of an unarmed Black man Markeis McGlockton was sentenced to 20 years in prison - Drejka didn't get a hug from the white judge.

Unlike Botham Jean's family there was no hugging and forgiving this white murderer, McGlockton's father, Michael McGlockton Sr., told Drejka that "he killed his only biological son and that because of you, our lives will never be the same. You deserve to die in prison, in the Bible it says that in order to get into heaven we must forgive those who trespass against us. At this point in my life I am not there yet. And if it just so happens that the Lord chooses to take me before I come to terms with this, then I will see you in hell, where you and I will finish this. Mark my words."
Posted by Kenny Anderson at 7:02 PM