Gary ‘Bull’ Reynolds a Solid Friend-Brother: Happy Birthday to You!!

This post is a Birthday Remembrance of some highlights to my Brother from another mother Gary ‘Bull’ Reynolds born July 26th. Me and big Bull grew up like Brothers, as a young boy I gave him the name Bull because he was tough, didn’t back down, and was dependable. We were both Leos’, from the sense of an animal totem the bull is a male totem and is associated with the sun.
I’ve known Bull since the 4th grade, we were boys who came of age during the 1960’s Civil-Rights Struggle and Black Power Movement. We attended Bagley Elementary School (Detroit, MI). At Bagley we were daily exposed to the Civil-Rights Struggle and racist violence via news reels from our teacher Catherine Blackwell who became an internationally recognized authority on African history and culture.
Ms. Blackwell was a pioneer in the field of African and African-American studies; her 30-year career with the Detroit Public Schools was devoted to teaching studies from an African-centered perspective. In 1968 myself and Bull led a walkout at Bagley when Dr. King was assassinated and I’ve been walking ‘struggling’ against racial oppression since then.
As boys we were also exposed early to African culture by our neighbor Lorenzo C. Wright whose sons Roddy and John-John were our close friends coming-up. Mr. Wright was a member of the gold medal winning 4×100 meter relay team at the 1948 Olympic Games. Mr. Wright had been to African and had a lot of African artifacts in his home educating us with a sense of African pride.
Also when we were boys older Brothers like Ramone Thompson and others constantly educated us with Black consciousness through music; daily they had us listening to Gil Scot Herron and the Last Poets. Throughout our lives me and Bull’s relationship was anchored on Black consciousness that was formed in us very early in life.
Besides the impact of Black consciousness growing up as boys, we were grounded in sports particularly basketball and football where we put in some serious work. In backyard basketball (2-on-2, 3-on-3) we were the dynamic duo; I had the outside jump-shot game and Bull had an inside game like NBA legend Wes Unseld.
In sandlot football we were a forced to be reckoned with, I would go on to play basketball in Jr. High and High School and Bull would go on to be an All-City football player at Detroit Redford where they went undefeated for 2 years winning back-to-back City Championships.
Bull was my ride or die partner, we learned together, played together, and fought together; we fought racist white children together; we had some run-ins with white men when we were grown, fought and handled them in their own city, we were taught to always stand-up and fight racism. Of course we fought Black males together only when it was necessary.
There was a memorable fight against some Black males, I remember we had to fight some Kappa Fraternity members back in the day in our 20’s, we went to their frat house to confront them about bully-jumping on somebody close to us. We were grossly outnumbered but we held our own, Bull was picking up and throwing Kappas around and down one after another. Another friend with us who was like a Brother to us ‘Huck’ now deceased had to pull out the 'roscoe' to put them in check and even the odds.
Listening to music played a key role for me and Bull as life-long friends particularly jazz, growing-up Bull played the saxophone and his dad played upright bass for the Detroit Junior Symphony Orchestra. Bull’s favorite jazz musicians were Stanley Turntine, Charles Earland, Lonnie Liston Smith, and Grover Washington Jr; he also loved him some jazz singing Nancy Wilson, Marlina Shaw, Jean Carne, and Phyllis Hyman.
Another memorable thing about Bull was he liked bake goods, growing up my younger sister Marilyn was a very good baker, she made these chocolate-chip cookies that were like brownies, she always made a paper lunch bag full of the cookies just for Bull and he wasn't giving up none!
Moreover when my first child was born - my daughter Javonn, Bull was the first person I told about being a father. I remember we sat on the ground in front his garage with my baby daughter in the stroller discussing the importance and challenges of being a new young adult Black father; he and I always had conversations about our own fathers.
Bull would become a high-school teacher and football coach at several Detroit schools. Over many years as a teacher and coach including working at Kronk Recreation Center Bull was a mentor to many young Black males who did not have fathers in the home. Bull passed down the Black consciousness knowledge and wisdom to them we had received growing up along with the insights from his own life experiences.
Over the years as friend-brothers me and Bull faced the challenging general adversities, hardships, and distress that come along with being Black men in America and the particular challenges in our own lives. Bull is deceased now and his picture is hanging up on my wall. I still conversate with him, I learn lessons from his life and character, I appreciate his life - I celebrate his birthday today. 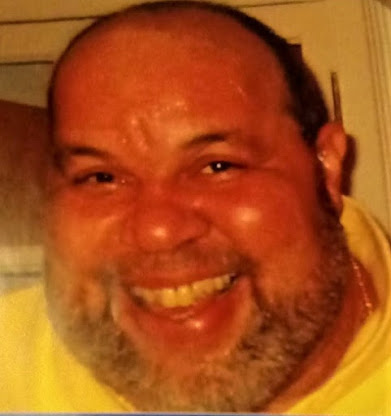 Posted by Kenny Anderson at 8:49 AM