A Black Man's Question: Who's Our Worst Enemy?

Black folks, unfortunately too many of us have a habit of spreading misinformation that 'we are our own worst enemy', when you 'fact check' this sentiment statement it's disproven by history.
This statement could only be true if we enslaved ourselves for 246 years (1619-1865); then systematically repressed ourselves 'Jim Crow' apartheid for another 100 years (1865-1965): a total of 346 years of oppressing and exploiting ourselves.
Furthermore since 1965 to the present (55 years) we've caused our own selves to suffer the most in the U.S. from unemployment, poverty, wealth disparity, homelessness, incarcerations, sicknesses, and deaths, again not true!
Let us be clear Black folks we haven't had the power to be our own worst enemy, only institutionalize white supremacy has had that power from past to present to be our worst enemy. Do we engage in self-divisive, self-defeating, and self-destructive behaviors absolutely!
However to equate ourselves as our own worst enemy compared to institutionalize white supremacy is like absurdly comparing a 'regular bomb' to an 'atomic nuclear bomb'! I addressed this issue of being our own worst enemy as a result of a recent conversation I had with a Black female college student doing a class project on racism and conversating with some other young adult Black females.
I asked them what did they learn about racism in their homes and they said it wasn't discussed that much, so they didn't know that much; so what did they learn: be a nice person, get good grades, go to college, get a good job, and be aware of Black men - don't trust them!
Yet they weren't told to be aware of white male supremacy enemy in all its forms and fashions; racist random white men and police who murder their grandfathers, fathers, uncles, male cousins, and friends. No, Black men our your own worst enemy, not racist white men! It's interesting you don't hear white mothers even when their divorced telling their daughters not to trust white men.
I remember listening to Malcolm X and his response to some Black men talking about how we steal from each other, Malcolm interjected saying "you can't out steal the white man, he stole a whole people from Africa."
Yes, we got to stop saying we are our own worst enemy because it's dishonest, discouraging, perpetuates distrust/disunity, and promotes a default contradiction of dependency on racism to gain racial equality.
Moreover it prevents us from knowing and preparing ourselves through self-determination to deal with our greatest enemy 'institutionalize white supremacy'. 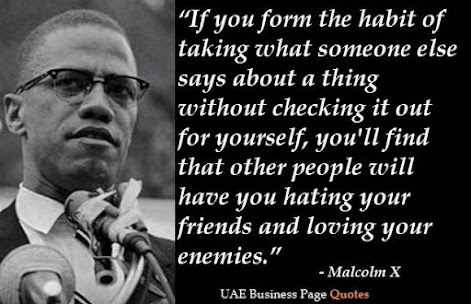 Posted by Kenny Anderson at 1:26 PM