I found in life that what you constantly talk about influences your ‘priorities’ and ‘practices’; often determines your ‘attention’ and ‘actions’; what you repeatedly talk about ‘reprograms’ and ‘reinforces’ behaviors.
I also found that when you are an oppressed people and health is not talked about as a priority then health practices are poor – ‘chronic diseases are more prevalent’ and rampant. Case in point, recently I asked a number of small groups of Black men both younger and older what were the 4 main things they talk about with Black men who they are close to (family, relative, friends) they said:
*Sports
*Vehicles (trucks, cars)
*Women (sex)
*Money (lottery)
*Food
*Alcohol
*Marijuana
*Shooting the shit (gossiping)
*Music (rap, etc.)
*The Streets (crime, violence, jail)
Twenty-four years ago I wrote a health editorial article in the Oakland Press titled “Black Men Must Work to Improve Their Own Lives” that addressed the deplorable health status of Black men at the time. The same things Black men highlighted to me recently what they talk about, was the same things they were talking about 24 years ago.
From past to present the overwhelming majority of Black men weren’t talking about their health, so it aint no surprise that Black men’s health is still the most deplorable ‘no improvement’. Recent health statistics (2020) show that Black men in the United States suffer worse health than any other racial group in America.
As a group Black men have the lowest life expectancy and the highest death rate from specific causes compared to both men and women of other racial and ethnic groups. Statistically speaking, Black men live seven years less than men of other racial groups.
Black men also have higher death rates than Black women for all leading causes of death. Black men have a higher incidence and a higher rate of death from oral cancer, and have a much higher risk of developing HIV/AIDS in their lifetime.
Other Black Male Health Statistics:
*44% of Black men are considered overweight
*37.5% are obese
*Black men suffer more preventable oral diseases that are treatable
*Black men have a higher incidence of diabetes and prostate cancer
*Black men have a high suicide rate; it's the third leading cause of death in 15- to 24-year-olds
Black Males 10 Leading Causes of Death
According to the Centers for Disease Control and Prevention (CDC), the following were the leading causes of death of Black men in 2017:
1. Heart disease (23.7% of total deaths)
2. Cancer (20.2%)
3. Unintentional injuries (7.9%)
4. Homicide (5.0%)
5. Stroke (4.9%)
6. Diabetes (4.3%)
7. Chronic lower respiratory diseases (3.2%)
8. Kidney disease (2.6%)
9. Septicemia (1.8%)
10. Hypertension (1.6%)
Homicide a Leading Cause of Death for Younger Black Males
In the category of leading causes of death, when broken down by age group for Black males in the U.S., more disturbing statistics are revealed.
For young Black men between the ages of 15 and 44, the number one cause of death in 2017 was homicide. A further breakdown of deaths by age group among Black men due to homicide:
*Ages 1-19, homicide accounted for 35.3% of total deaths
*Ages 20-44, 27.6% of total deaths
*Ages 45-64, 2.1% of total deaths
In closing Black men, if we don’t talk about our health as a priority then we will continue to die super-disproportionately. I got to keep it 1000, Black men our ‘health-neglect’ that causes chronic diseases kills more of us (95%) than Black-on-Black male murders (5%) and racist police killings.
Black men when are we going to start talking about our health more than we constantly talk about Lebron being the GOAT and Steph being the all-time greatest shooter. When are we going to start talking about our health more than we constantly talk about ‘debate’ who makes the best truck GM, Ford, or Dodge?
According to what we talk about as Black men it’s clear that basketball, trucks, and other bullshit is more important than our lives ‘health’. 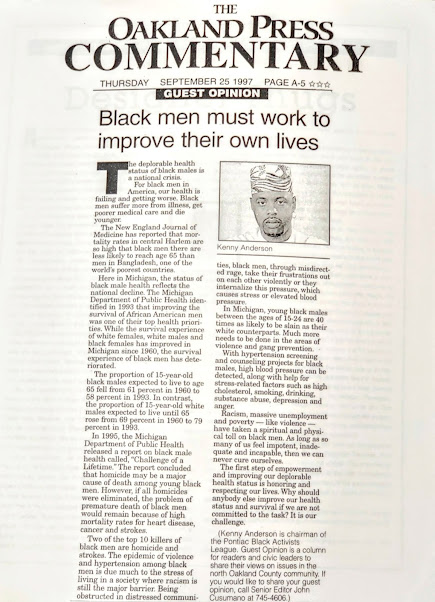 Posted by Kenny Anderson at 6:08 AM