by Kenny Anderson
From my experience as a Black man and what I’ve seen, the life-span of the majority of us as Black men in racist America whatever the ending age has been a constant grind that’s distressing and exhausting. Living for Black men in this country is a tiring battle; psychologist refer to it as ‘racial battle-fatigue’.

Black men we live everyday being ‘male-bashed’ by so many Black women and non-Black females, this male-bashing causes too many of our children and grandchildren to disrespect us. Black men we live under a barrage of being unappreciated, devalued, disgusted, slighted, blamed, accused, suspected, investigated, discriminated, rejected, neglected, stunted, marginalized, hunted, attacked, murdered, victimized, and traumatized.

All the chronic stress Black men face every day causes many of us to die prematurely from heart attacks and strokes; while many of us seek daily temporary relief through drugs, alcohol, sex, religion, ego-tripping, or zoned out in sports land. Many Black men try to find a ‘space’ in the house generally in the basement ‘man cave’ to debrief and relax from relentless stress.

Ra Ubadiah Hotep His Open House: An Oasis in the Distressed Desert

For decades in Pontiac, Michigan Ra Ubadiah Hotep who recently became an Ancestor was a conscious cultural facilitator and Black male advocate who provided distressed Black men with much-much more than just a man cave; he opened up his home on Fridays for decades as a space where Black men could come relax, rejuvenate, recreate, and redevelop themselves.

Ra Ubadiah Hotep was an embodiment of 1960’s Black Nationalism & Cultural Nationalism that he kept alive so we could be connected to this super-important classic period. Ra Ubadiah Hotep left an indelible mark on me by exposing me to the writings of the great Black Panther revolutionary George Jackson who matured my thinking and sharpened my political ideology.

Ra Ubadiah Hotep would send many Brothers hand-written letters including writing many in jail and prisons; he was a surrogate father-figure for many younger Black males. Ra Ubadiah Hotep was an avid reader and was constantly recreating himself to his death.

About a month ago I talked with Ra Ubadiah Hotep for several hours, our conversation focused on Kemetic spirituality and its funerary ritual that he requested I conduct for him. In the Kemetic funeral ritual the deceased heart was weighed on scale before Ancestral jurors. Indeed Ra Ubadiah Hotep’s heart was with the overall betterment and wellbeing of Black men, thus our Paternal Ancestral jurors’ judgment is that they are pleased with his heart!

Ra Ubadiah Hotep is now an Ancestor to be constantly remembered through portraits of him on walls and altars; his birthday becomes a holiday celebration; and libations poured consistently in his name. As Black men we thank you for caring about us, in your memory let us extend your legacy by continuing to care about the welfare of Black men. Much Love & Appreciation!! 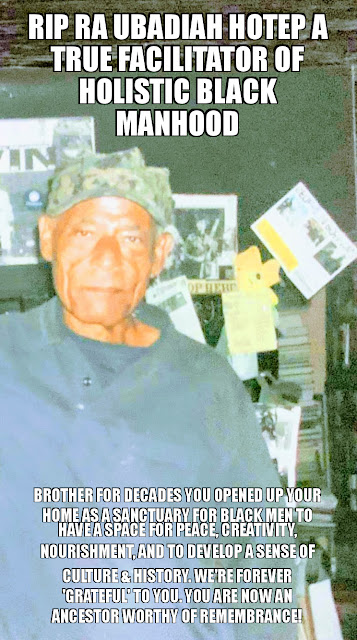 Posted by Kenny Anderson at 7:19 PM