For some time I'm often questioning myself of why when I drive around majority Black cities in Metro-Detroit including my own home cities (Pontiac, Detroit) where I see very few Black Lives Matter yard-signs, yet I've been through several predominately white cities and Black Lives Matter signs are everywhere. 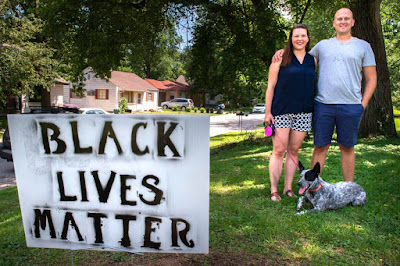 I'm not raising the question of Black Lives Matter yard-signs as a sole substantial criteria because slogan signs are symbolic and symbolism can be meaningful, superficial, pacifying, and deceptive; nevertheless racial and political symbolism must be analyzed.

From my perspective, the Black Lives Matter yard-signs that I've seen throughout several predominately white cities is symbolic 'specific' support that racist 'gross' police murders should stop, that police reforms are necessary now.

The Black Lives Matter yard-signs proliferating in neighborhoods of white cities don't represent a consensus nor mandate for total Black-White racial equality, yes racial equality has not been clearly defined, there's no 'agreement' on what it means as Dr. King stated:

“There's not even a common language when the term equality is used. Negro and white have a fundamental different definition. Negroes have proceeded from the premise that equality means what it says and have taken white Americans at their word when they talked of it as an objective. But most whites in America, including many person of goodwill proceed from a premise that equality is a loose expression for improvement. White Americans are not even psychologically organized to close the gap; essentially it seeks only to make it less painful and less obvious but in most respects to retain it. Jobs are harder and costlier to create than voting rolls. Eradication of slum housing million is complex far beyond integrating buses and lunch counters.”

Now to my observations of the absence of Black Lives Matter yard-signs in Black communities, the absence of these symbolic self-worth signs reflects the demoralization of many-many Blacks folks due to the massive disproportionate Black deaths during this COVID-19 pandemic.

With all these coronavirus deaths coupled with racist police murders many-many Blacks folks believe Black Lives really don't even Matter thus no yard-signs. Yes too-too many Black folks are physically sick, depressed, grieving, scared, and apathetic; while many others are 'manic' wilding-out, drag-racing, and killing.

While many-many other Blacks folks that I see are not wearing protective masks partying 'like it's 1999' on porches, in backyards, and at parks; they just want to have a 'good time' during these awful 'bad times'; they're getting their eat, drank, and smoke on to the fullest!!! Indeed many-many Black folks don't have no fight in them so they a'int gone put up no BLM yard-signs.

Malcolm X stated: "I'm not going to sit at your table and watch you eat, with nothing on my plate, and call myself a diner. Sitting at the table doesn't make you a diner, unless you eat some of what's on that plate."

Posted by Kenny Anderson at 8:47 AM