Black folks from slavery to the present our labor, inventions, genius, creativity, music, dress, and overall culture is still being super-exploited.
Let's take a look at the cultural exploitive YouTube Channel Vlad TV.
Vladimir Lyubovny 'Vlad' is a former white rap mixtape DJ who transitioned to hip-hop video journalism when he launched VladTV.
Recently well known Black rappers Lord Jamar, Royce da 5'9, Mysonne who've been frequent guests on his show along with others have distance themselves from media personality Vlad due to him lying on Nation of Islam leader Minister Louis Farrakhan. 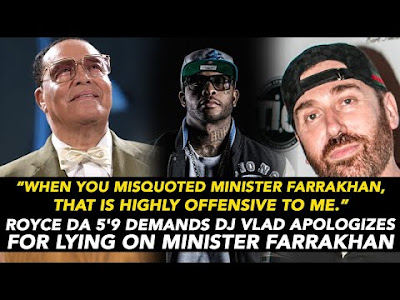 The problem started when Vlad interviewed comedian DL Hughley on his VladTV show and talked about Minister Farrakhan’s July Fourth World Address. Rappers and NOI members feel that DJ Vlad misconstrued the Minister’s words to taint him as calling for violence against Jews.
Vlad said that Farrakhan not only calls Jews “Satan” but also encourages people to pick up a rock to throw it at them. But in the actual Farrakhan speech, the Minister encourages people to pick up “the stone of truth” against “so-called” Jews who are not being “true” Jews. Vlad refused to apologize for misconstruing Farrakhan's words.
What is Vlad (Vlad TV)?
In 2008 Vlad established himself as an interviewer primarily interested in rappers’ personal and illicit histories. Vlad has been accused of often going for gossip instead of news or discussions about music; he's far far more interested in asking for detailed accounts of alleged criminal activities and incidents.
It has been reported that Black rappers, prominent ex-gang bangers and drug dealers do interviews on his TV platform to get publicity without charging Vlad, who then makes money by editing his videos into segments raking in millions of views per video and Vlad receives funds in an advertisement.
From my perspective this white man Vlad exploits Black folks need to be seen 'invisble man syndrome' getting them to tell their business 'self-incriminating' and talk about other Black people 'creating beefs' capitalizing off it.
According to celebrity net worth VladTV YouTube show run by DjVlad has generated him an estimated net worth of $10 million. Vlad has more money than the overwhelming majority of Black rappers.
I remember several years ago watching Vlad TV for the first time and asking myself why are these Black men running their mouths to a white interviewer you can't see, I viewed Vlad as a on the come-up media personality agent provocateur.
Unfortunately we haven't learned we're still running our mouths being prey to all types of non-Black cultural vultures. 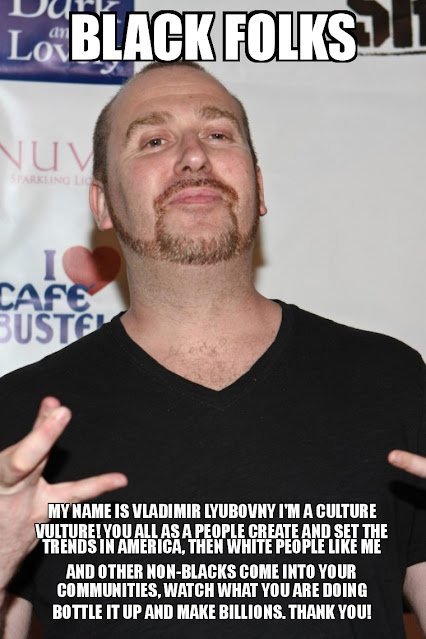 Posted by Kenny Anderson at 1:10 PM