Stand Your Ground: A White Vigilante or Random Insecure White Person Can Legally Kill a Black Man in America and Usually Get Away Scot-Free!

Stand your ground laws throughout America in general allow people to respond to threats or force without fear of criminal prosecution. In other words someone facing an imminent threat can use lethal force right away.
For Black men in America who are too often viewed as inherently or presumptively threatening based on their race and gender “Stand Your Ground” laws have been proven to be deadly. Indeed when white people perceive a Black man as so-called threatening ‘negrophobia’ they can kill them and often face no legal consequences.
For example in Florida (Feb 2012) Trayvon Martin a Black male youth was shot and killed in his Florida neighborhood on his way home from buying candy 'skittles' by George Zimmerman an armed neighborhood watch volunteer who saw him as “suspicious” and dangerous pursued him, confronted him which resulted in a physical confrontation. Zimmerman feeling threatened killed the 17-year old Martin and was acquitted of the charges against him under Florida’s “Stand Your Ground” law.
On February 23, 2020 three days before the 8th anniversary of the 2012 killing of Trayvon Martin. Ahmaud Arbery, a 25-year-old Black man was shot and killed by a white man in Brunswick, Georgia because he was viewed as 'suspicious'.
The killer and his father a former police officer armed themselves with guns got into a pickup truck with a third man, and chased Arbery trying to cut him off while he was jogging; they confronted him with guns a fight occurred and unarmed Arbery was shot to death because the shooter felt threatened. Initially the killer and his father were not arrested due to standing their ground.
The prosecutor assigned to Mr. Arbery’s shooting concluded that the two armed white men were right to be suspicious and afraid of Mr. Arbery because he had an ‘aggressive nature’. The prosecutor concluded that the killer was allowed to use deadly force to protect himself under Georgia’s “Stand Your Ground” law and should not be arrested or charged for killing Mr. Arbery. The killer and his father were finally arrested on May 7, 2020 after massive protests.
The Killings of Black people by Whites Are More Likely to be Considered Justified
A recent report from the Marshall Project finds that there is often no criminal sanction when a white person kills a Black man in America. 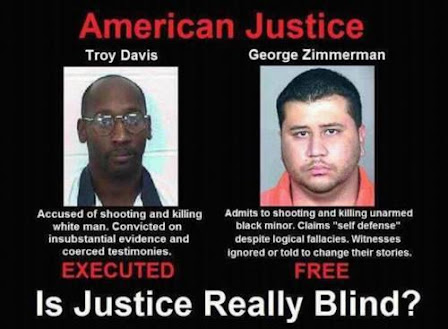 The Marshall Project examined 400,000 homicides committed by civilians between 1980 and 2014, and found that in one in six killings of Black men by a white person, there is no criminal sanction. That rate is far higher than for homicides involving other combinations of race, and the disparity has persisted for decades, regardless of the circumstances.
Police agencies appear to be much more likely to characterize a killing as self-defense or justifiable when the victim is a Black male. Overall, fewer than 2 percent of homicides by civilians are classified as justifiable. But in cases when a Black man was killed by a non-Hispanic white civilian over the last three decades, almost 17 percent were ruled justifiable.
Examining data sets from the Federal Bureau of Investigation, reporters found that police label killings of Black males by white people justifiable more than eight times as often as others, and this racial disparity persists across different cities, different ages, different weapons, and different relationships between killer and victim.
Even after adjusting for the ages of the killer and victim, their relationship and the weapon used, the likelihood of a white-on-Black-male case being called justifiable was still 4.7 times higher than in other cases. In contrast, in cases where a Black civilian killed a white person, just 0.8 percent were ruled justifiable.
The report explains that, while self-defense laws vary across states, typically a homicide can be ruled self-defense when the killer faced no actual threat but had a reasonable belief he or she did,” even if that belief is based on race-based stereotypes or presumptions about dangerousness.
Studies show that Whites who kill Black men in Stand Your Ground states are far more likely to be found justified in their killings. In non-Stand Your Ground states whites are 250 percent more likely to be found justified in killing a Black person than a white person who kills another white person; in Stand Your Ground states that number jumps to 354 percent.
Indeed in America a white vigilante or random insecure white person can legally ‘dejure’ kill a Black man in America and in most cases will often face no legal consequences. Unfortunately in Black communities there is a ‘defacto’ stand your ground ‘modus operandi’ of Black-on-Black male shooting murders.
Yes, Black men ‘stand your ground’ is putting us ‘beneath the ground’! Posted by Kenny Anderson at 4:53 PM